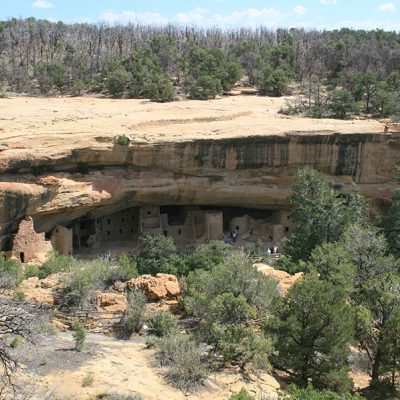 In August 2015, a rock fall at Spruce Tree House cliff dwelling prompted park officials to close the site for visitor safety until an analysis and hazard assessment could be conducted.  After that initial evaluation was completed in September 2015, it was decided that the entire site should be closed to the public in October 2015.

In November 2015, a select climbing team comprised of National Park Service employees from Chiricahua National Monument, Rocky Mountain National Park and Arches/Canyonlands National Parks completed a technical scaling project at Spruce Tree House.  At this time, the arch crack system above Spruce Tree House was inspected and any loose material was removed.  However, other rock fall concerns were identified during this process, and Mesa Verde has determined to keep Spruce Tree House closed for the foreseeable future until a full geotechnical assessment can be performed.

Spruce Tree House may be seen from overlooks near the Chapin Mesa Archeological Museum. Rangers are available to answer questions. There are many other things to see and do including a visit to the Museum; visiting sites along the Mesa Top Loop with views of other cliff dwellings, including Cliff Palace; exploring Far View Sites; and hiking trails. Access to some of these activities are weather dependent, so please check at the visitor center or museum at the time of your visit to ask about access to areas such as the Petroglyph and Spruce Canyon hiking trails, Far View Sites, Park Point, or the Cliff Palace Loop Road. The Mesa Verde Facebook page (https://www.facebook.com/mesaverdenps) will post status updates about these weather dependent areas if there are changes due to spring snows.

Spruce Tree House is the third largest cliff dwelling in the park.  As one of the best preserved ancestral Puebloan sites in the Southwest, there are many examples of original architecture including intact roofs, floors, and original plaster designs in the dwelling.  Due to the accessibility of the site and its self-guided access, it is the most visited cliff dwelling in the park.

Due to the complexity of the project and the significance of Spruce Tree House cliff dwelling, there is a four-phase sequential approach planned.  The first phase is to use Light Detection and Ranging (LiDAR), a remote sensing method employing a laser to obtain a complete structure profile.  Also, geotechnical information will be collected to be integrated in the numeric modeling and analysis.  Phase Two will consist of geotechnical engineers conducting detailed three-dimensional computer-based analyses of the original condition, 1960’s stabilization and probably 2016 stabilization, using information from Phase One as a chronological modeling sequence.  Phase Three will include developing plans, specifications, and gathering necessary information to complete stabilization work.  Phase Four will be the performance of the work.